Tutorial: How to get to Moho 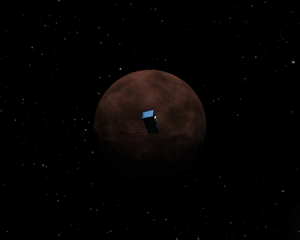 This stage can either have a 1.25, or 2.5m capsule on top, it all depends on your preference, but the engine should be a 2.5m engine. As Moho has very little gravity, it is quite easy to get off the surface. So this stage will be the smallest. To test your return stage, see if you can start on Minmus go to, and orbit the Mun and back to Kerbin, this will give you a rough estimate for the amount of fuel you need to land safely on Kerbin. Remember to place a heatshield on the bottom of your capsule, and put a Clamp-O-Tron Docking Port on the top of the capsule. As this is a long trip, put some Z-4K Rechargeable Battery Bank on the capsule, not on the lander, or return stage.

This stage should be a 2.5m stage. It's fuel tanks should compose of a Rockomax X200-16 Fuel Tank and a Rockomax X200-8 Fuel Tank, with a Rockomax "Poodle" Liquid Engine on the bottom. This stage can be used for in-orbit Science around Moho, just remember to collect your science before detaching the stage.

This stage should be the last 3.75m stage. It should have a Kerbodyne S3-7200 Tank as it's fuel supply. The engines should be, in the center a Rockomax "Mainsail" Liquid Engine, then place 4 Cubic Octagonal Strut and attach LV-T30 "Reliant" Liquid Fuel Engine's to these, use Offsetting as needed. If needed on the Orbiting Stage (see below), put a fairing around the engines to increase aerodynamics. This is an ideal stage for Kerbol orbit science gathering because it will be passing out of Kerbins SOI and into Kerbols.

This will be the biggest stage on your rocket. As the fuel supply, it should have a Kerbodyne S3-14400 Tank and a Kerbodyne S3-7200 Tank. For propulsion, undoubtedly, use the S3 KS-25x4 "Mammoth" Liquid Fuel Engine. As side boosters, use the LFB KR-1x2 "Twin-Boar" Liquid Fuel Engine, also use S1 SRB-KD25k for extra thrust. Make sure to have fins on this stage, as this one should get you about 2/3 of the way to orbit

This is a very routine launch, put your spacecraft in a rough 150 by 150 Km orbit. See Tutorials for orbiting help.

This is most likely the longest step. Wait until Moho is between you and Kerbol, then burn Retrograde until you get an encounter. Once you are near Moho periapsis, set up a Maneuver node and get in orbit around Moho, it does not have to be circular. Congratulations, you have just got in orbit around Moho!

This is a very easy step, very similar to returning from the Mun. Burn Eastward until you are in a 100 by 100Km orbit. Then wait until Kerbin is about 75 degrees ahead of Moho. Then set up your Maneuver node, and find an encounter with Kerbin. Use your last remaining fuel to get in orbit around Kerbin, at least inside the orbit of the Mun so if a rescue ship is needed it won't have to take long to build and has a better chance of getting an approach with it.