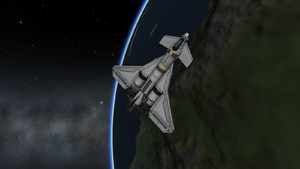 A spaceplane, the Aeris 4A, in orbit

A spaceplane is a hybrid of a plane and a rocket capable of atmospheric flight with wings and spaceflight with reaction engines. Most spaceplanes are single-stage-to-orbit capable or have only some minor parts which aren't reusable. The main advantage of this is that, when playing in Career mode, more parts from the vessel can be recovered, thereby giving a higher amount of funds from retrieved parts. The main disadvantage is reduced payload and range as the launch engines, wings, and all fuel tanks must be carried everywhere in space. Designs like the Space Shuttle and Buran, having boosters and external fuel tanks, provide a compromise between capability and cost-saving.

Various pre-built stock spaceplanes are available, 2 of which are SSTO spaceplanes; the Aeris 4A and the Dove. The latter especially shows how simple a small spaceplane can be with the CR-7 R.A.P.I.E.R. Engine. 3 are like the Space Shuttle to varying degrees; the Dynawing, the Learstar A1 and the Slim Shuttle.

Jet engines can efficiently propel craft in Kerbin and Laythe's atmospheres. In space or oxygen-free atmospheres, less efficient reaction engines must be used. Reaction engines sometimes replace jet engines to simplify construction without restricting the craft to oxygenated atmosphere, but reducing the efficiency even more. A plane with only jet engines cannot reach a stable orbit because its engines will shut down before leaving the atmosphere. Such airbreathing engines are rarely capable of raising apoapsis out of Kerbin's atmosphere, and can never raise periapsis above their maximum operational height. Raising the periapsis out of the atmosphere requires non-airbreathing engines.

Winglets, control surfaces, or reaction wheels enable atmospheric maneuvering, with RCS sometimes used in extreme situations. Winglets are useless in space. SAS is commonly maintains attitude while in atmosphere lest the spaceplane tilt if its center of mass is not at its center of lift. Since the center of mass usually moves during flight due to fuel consumption, the craft can be trimmed using Mod+WASD, essentially setting the 'default' position of the steering systems.

Landing is most often done with only landing gear, which was also used during takeoff. Parachutes, rocket engines, and the gear's built-in brakes can slow the craft. During emergencies or beyond good landing spots, separating the command module and landing it with parachutes can save the crew in dense atmospheres.

Kerbin has two runways whereupon spaceplanes can land. The first is at KSC, where most spaceplanes are also launched. It is long and wide. If an approach fails, landing is still possible on the flat surrounding area. The second runway, at the Island Airfield, is a dirt landing strip that is both shorter and narrower than the KSC runway, impeding landing.

Any sufficiently flat terrain can be landed on. Most celestial bodies have some level areas among occasional mountain ranges, cliffs, or craters. Smaller bodies' terrain, especially Mun's, is usually rougher than larger ones', so it may require more time scouting before deorbiting.

Landing a spaceplane without an atmosphere is more difficult than within one.

For a standard horizontal landing, finding a suitable strip of flat terrain can be a significant challenge, and there will be no aerodynamics to smooth the approach. A backwards landing can allow using engines to shorten the braking distance but likely complicates visibility and control. Regardless, the plane's wings' mass increase inertia and they're also vulnerable to breakage − drawbacks not faced with a typical rocket lander.

In a vertical landing, normally placed landing gear face 90 degrees off retrograde burn vector, so they cannot be used unless there's time to pitch the plane down to a level orientation after vertical speed is within safe tolerances. Landing difficulty increases with gravity, usually requiring small vertical rockets or tail-mounted landing legs. Another strategy is building the plane's cockpit as a detachable lander that returns to orbit and docks with its ship's main body.