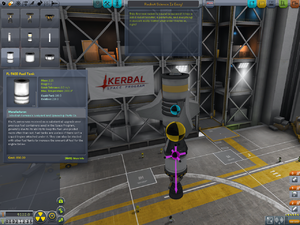 Mode: 조립동 화면 상단에는 몇가지 선택창들이 존재합니다. 좌측에는 The left most controls vary with the current mode the VAB is in. Mode is controlled by the three blue icons just to the left of center along the top. These are: Parts (the default mode), Action Groups, and Crew. These modes are each described on their own page.

Craft Name is in the top center. Clicking on the name allows the user to edit the name before saving the current craft. It also opens a drop down box that lets the user enter longer text such as a description of the vehicle, operations guides, or anything else noteworthy. Clicking anywhere else on the screen closes the drop down box.

Mission Flag is just to the right of top center. It presets the flag used, if this is a manned vehicle, when a Extend-o-matic Series A1 Deployable Flag is placed once landed.

File controls are located along the top right of the screen.

Launch is second in from the top right corner. If not recently saved, overwrites Auto Saved Ship on disk, then switches from the VAB to the Launch pad.

Exit is the rightmost button. It exits the VAB back to the Space Center.

Staging On the right edge of the screen, rising from the bottom, is a dynamic and editable list of the current stages of the vehicle under construction. The game will attempt to build the stages as the user adds parts. However, the user may want to change the order that stages are activated, or edit what happens at each stage.

Notifications are on the bottom, second in from the right. These report completed Contracts.

Contracts are on the bottom, just left of Notifications. These list currently active contracts accepted in Mission Control.

On the east face of the assembly bay tower is an 8-leaf vertical lift door[2] approximately 93 m tall. Closed at all other times, during craft assembly the east door is visibly open (giving 50 m clearance) as though ready for the craft to be rolled out. However, craft appear directly on the Launch Pad and the door is never seen in motion. The view outside is always lit as midday regardless of time in-game. Additionally, on the north, west, and south faces of the VAB are large, yellow, swinging doors which appear to be auxiliary entrances.

Spoiler: Additional things to discover.
Beginning at the southeast corner of the assembly bay, a series of climbable stairs and ladders lead to the roof of the VAB. However, surmounting the ladders onto the helipad deck is very difficult.
Spoiler: Glitch
If a Kerbal jumps off of the VAB roof, they will survive, but may temporarily glitch on landing, with the arms shooting outward and becoming the "thing" for a few seconds. It is similar to the effects experienced when falling into Jool.