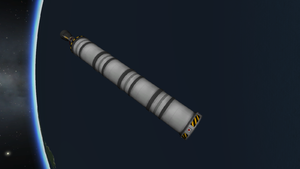 Some debris in orbit around Kerbin

Debris is any part or assembly of parts that is not connected to a command module.

Debris is normally left behind from decoupling, or as vehicle remnants not destroyed outright in a catastrophic failure. These will be automatically named “<name of originating craft> Debris”. Debris can also be a vessel launched without a command module, though these will not have “Debris” appended to their name.

Like all objects, momentum of debris continues until arrested and, when in space, debris will continue to orbit. Debris can be tracked from the Tracking Station, though the filter to show debris is off by default.

To remove debris it can be recovered or terminated via the Tracking Station. The Recover option is only available for debris or craft landed on Kerbin. Otherwise the Terminate option will remove the debris from the game, though this kills any crew aboard, adding them to the “Lost” list in the Astronaut Complex.

The game automatically sets discarded stages as debris when they have no command module. For example TT18-A Launch Stability Enhancers are usually debris after launch. With version 0.22 debris on the Runway or Launch Pad get automatically removed, when a new craft gets prepared to start. This includes the launch clamps eliminating the requirement to manually confirm that they can be removed.

If debris has a docking port, the resources the object contains can be recovered by docking to it, though the docking craft will need appropriate storage tanks or batteries and enough open capacity for the resources. As of version 0.23.5, resources can also be reclaimed from debris lacking a docking port by craft with an Advanced Grabbing Unit.

It is desirable to avoid creating debris so that processing power is not wasted. This can be achieved with various tactics. One is to decouple before the orbit is stable, so that the debris falls back and either collides with the surface or gets slowed down by the atmosphere. To get slowed down, the debris has to be loaded, so in most cases it has to be active. It is also possible to add a command module and keep some leftover fuel in the tank. With the leftover fuel and command module the debris can do a retro burn making the orbit unstable. It is also possible to add a docking port and send a small vessel to dock with it and deorbit it by performing the retro burn with the small vessel. As spent rocket stages are relatively light, compared to their mass when fully fueled, the thrust and fuel needed to deorbit is low compared to the thrust the stage produced before jettisoned.

Any debris not within 2.5 km (the physics range) of the active vessel, will be removed if it is in an atmosphere with atmospheric density of greater than 0.1 atm. On Kerbin this corresponds to an altitude of around 23 km. This can be an annoyance to players who want to recover spent stages in career mode.

The default quantity of tracked objects is set to 250, but can be changed in the Settings menu. But as even the small Kerbol System is so huge, random collisions are unlikely. Also because crashing debris can only generate part sized remains or completely disappear there is no hazard of having a large amount of very small fragments.