Orbits of planets and dwarf planets 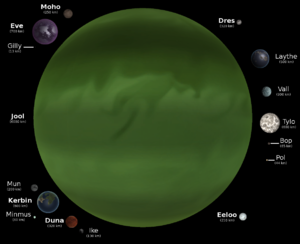 All celestial bodies orbiting Kerbol with the sizes to scale

Comparison of the radii

The Kerbol System is the planetary system in which Kerbal Space Program takes place. It has Kerbol as the central body which is orbited by 5 planets and 2 dwarf planets. Only Kerbin and Laythe have an oxygen atmosphere and only Kerbin hosts life.

It is difficult to determine if or where the Kerbol System has an edge. Kerbol itself has a non relativistic escape velocity, so it is possible to escape Kerbol. But it is not actually possible to escape Kerbol's gravitational pull since the sphere of influence is infinite. Although real-world gravity for any body technically expands into infinity, it does so only for Kerbol in KSP, so it's unclear if this property can be used to determine where the edge is.

Relation to the Solar System

Planet from the Kerbol System are defined from a few characteristics: