Pol is the smallest of the five natural satellites of Jool. The terrain is proportionally quite rough, with large ridges that make it resemble a pollen grain.

Pol has the second-lowest surface gravity in the Kerbol system: only Eve's moon Gilly is less massive. This makes bipropellant engines on a lander somewhat unnecessary, as landing can be completed with RCS thrusters only. Landing on Pol may still be difficult for inexperienced pilots due to the hazardous terrain with mountains, canyons, 45° slopes and jagged rocks, as well as its tiny sphere of influence.

Pol was added in 0.18. It was not part of the original Joolian system when it was released, along with all the other planets, except the Kerbin system, in 0.17.

Pol is in a large orbit around Jool with moderate eccentricity and inclination, which indicates it may be a captured asteroid like Gilly and Bop. Pol is tidally locked to Jool. 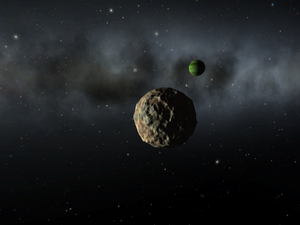 Pol's uneven surface with Jool and and its three large moons in the background.

Pol has many unique characteristics. The surface is wrinkled and uneven. It has many spiked mountains and very large cliffs that can reach up to 4 km high, and many kilometers wide. Many mountain ranges are circular and form bowl-shaped valleys. Its surface color ranges from brown over pale yellow to pale green. It appears to be composed of various phosphoric or sulfuric compounds and is covered in peculiar spire-shaped rocks.

Although very uneven, the surface of Pol is still not as irregular as that of Bop, despite its lower gravity. This suggests volcanic activity that re-paved the surface, or that Pol was formed via low-velocity accretion at relatively low temperatures.

A rover is difficult to drive on the surface of Pol because of the uneven terrain and low gravity.

The terrain scatter on Pol looks a bit like spiky, twisted rocks.

An orbit under 3000 meters is unwise, as it will almost always result in colliding with a mountain, spire, or plateau.