GreenKerbal291 is a inactive wiki contributor that joined the wiki 1 year ago?

GreenKerbal291 is a inactive user that joined the wiki in Febuary of 2016. When I'm on the wiki, I am usually editting my page, but I also upload photos and do minor edits on the wiki for contribution purposes. My favorite kerbals are Jebediah Kerman, Kirrim Kerman and Bill Kerman. Despite this, I have not been on the wiki for a while for absolute no reason.

I started playing Kerbal Space Program at the fall of 2013. I joined at the version of 0.21. My very first rocket was not a rocket, it took me a long time to figure at how to make a rocket at all. I also DID NOT KNOW AT ALL WHAT I WAS DOING!!! For example, I tried to go to the mun without map view and aim strait for it. During one of my first suborbital flights, I waited 30 minutes until the rocket got back into the atmosphere. Why? Because I did not know time warp. During Febuary, 2016. I made my first trip to Minmus and returned to Kerbin with no cheats. In the same month, I did a Mun mission and back without cheats a few days after the Minmus mission. I then created GreenKerbal291 on the Kerbal Space Program wiki in the same month. I then landed on Duna without cheats on Febuary 29th, but I will not be able to return back to Kerbin. March 13th was the day that I launched the Muno I, which went to the Mun and back To Kerbin. I then sent kerbals to Duna again, Ike, and Eve. SSTO science began around April and the first SSTO to Minmus occurred in June. My first submarine was in December and I sent some probes to Eve, Duna, and an space shuttle to Dres in December.

This is my list of my main recorded missions that have these requirements: No mods, no cheats and the missions must be during the time I had the wiki page. These missions are also 1.0 to 1.2. These missions also do not include Mun and Minmus missions.

The Evco went to Eve. This mission sent a Eve-suited landed with the the main ship of the Kerizons to Eve. The number of crew on board is 3. The rocket is launched 3/20/16 and never returned. 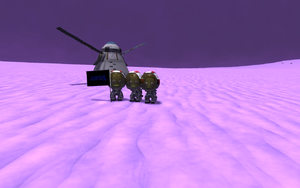 Kerbals from the Evco Mission on Eve

The only mod used was Kerbal Engineer Redux for SSTO missions

Thank you for these milestones!