Also, for building large ships with parallel side-mounted tanks, multiple docking ports along the side of the tanks can be used to attach the incoming tanks to the sides of the ship. The easiest way to guarantee the ports are in identical locations is to place two rings of ports on a generic part in the VAB and use that part for both the center stack and the incoming side tank. This way the docking ports will be in identical spots. However, since the docking angle is even more critical in this situation, using a mod such as NavyFish's Docking Port Alignment Indicator is necessary to guarantee there is zero rotation on the ports. 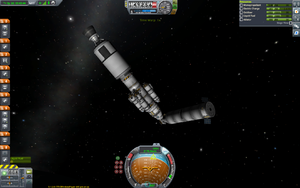