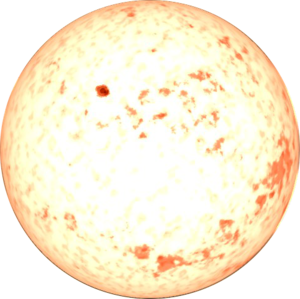 The only natural source of light: Kerbol

Light makes celestial bodies and parts visible to the human eye and thus the player. There are two sources of light:

There is currently only one natural source of light, which is Kerbol, the central star of the Kerbol System. It can power solar panels which generate electric charge. It is also possible to add artificial sources of light like electric lights to make parts of it visible while being in the shadow. All celestial bodies, except for Kerbol, throw a shadow behind them which is perceived as night when being on the surface.

A solar panel not working in Mun's partial shadow

The same view shortly after the eclipse

Eclipses happen when a celestial body passes in front of Kerbol blocking it fully or partially. As of 1.0.5[outdated] it doesn't get dark if Kerbol is blocked by a body which isn't the source of the sphere of influence the craft is in. To determine how complete a body will eclipse Kerbol the angular or apparent diameter (δ) of Kerbol and the eclipsing body must be considered. To calculate the angular diameter of a body the distance to the observer (d) and the radius (r) must be known. The apparent diameter represents the angle the eye have to turn to look from one side of an object to another. The formula to calculate this for a sphere is:

A body can fully eclipse Kerbol only if it is at least close enough to the observer to appear as large as Kerbol. From Kerbin's surface the Mun has an apparent diameter of 1.91° and Kerbol is about 2.20°, so the Mun can almost completely eclipse Kerbol.

Unlike the Mun, which has no inclination to its orbit, any moon which has an inclined orbit can cast or receive eclipses only during specific times during the parent planet's orbit around Kerbol. An inclined moon will eclipse Kerbol relative to its parent body, only when that moon's ascending and descending nodes relative to the planet's orbital plane are aligned with any part of the sun.

Partial and total eclipses will hide the outshine effect shown on the left.[specify when it is partially] Until the effect disappears and the moon or planet is visible in front of Kerbol, solar panels won't generate electricity.