Assuming you have the basic game installed and set up, you probably want to install some mods, game add-ons. Strongly recommended:

Editor Extensions
More ways to build in VAB or SPH.

MechJeb (MJ)
Avionics computer. So many features may be overwhelming at first; take it slow.

Kerbal Engineer Redux (KER)
Avionics computer. KER may be a bit simpler than MJ; sometimes it's the better tool. One, the other, or both.

Kerbal Joint Reinforcement (KJR)
So your rockets do not fall apart.

Docking Port Alignment Indicator
See what you're doing when docking.

Many other mods may be useful or just fun; but if you lack the mods shown here then you are just suffering unnecessarily. We'll assume, for the rest of these notes, that you have installed them all. 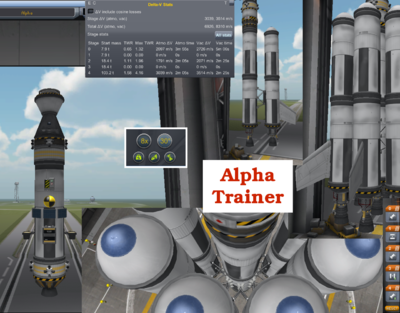 Let's take a look at a simple rocket for training. You can build this with all stock parts (except the MechJeb head) and with no prior experience.

Here you see the Alpha trainer itself. From top to bottom: docking port, an adapter, command pod, wheel, mono tank in yellow, FL-T800 Fuel Tank, another mono tank, and an LV-909 Liquid Fuel Engine. Attached is the MechJeb head just above CoM, a few solar panels, a battery, a pair of lights; and, top and bottom, rings of RCS thrusters, four each. Nothing about this design is critical; the only thing you might care about is the placement of the thrusters -- each ring is about as far as you can get from CoM and equally distant from it. This balances RCS thrust in rotation and makes the craft easier to control.

With a mere couple thousand m/s of delta-v, this is not going into space by itself. Besides, we want the whole thing in orbit. The Hard Rule says, very roughly, to put 8 tons of spacecraft in orbit we will need another 80 tons of booster rocket. So here we've tacked on a bit more. The engines are the larger LV-T45 Liquid Fuel Engine and there are a total of 9 copies of pretty much the same thing -- one in the middle, 8 in a ring attached to TT-70 Radial Decouplers. (If we used either of the other stock radial decouplers, we'd only have room for 6 strap-on boosters.) MechJeb now tells us we will get some 4830 m/s in atmosphere without touching the Alpha's fuel supply. A quick look at the known facts for Kerbin tells us we need 4550 m/s to make LKO; so we should be fine.

A few things to check before blastoff:

Before we launch, our rocket should be rock-steady on the pad. If built as described above, we should have no problem. Bigger rockets may require launch clamps and struts for stability.

Flying the Alpha is easy. Launch straight up until you hit about 10,000 meters then yaw right along the 90 degree heading.

Do not yaw too quickly! A light touch on your gravity turn is always required, especialy under FAR. Beware stall warning as shown here; if you turn too quickly then you may enter an uncontrollable tumble. Turn a little, wait, turn a bit more. The air doesn't care you're not an airplane. Don't stall out.

Turn smoothly until you are in vacuum at 70,000 meters; keep turning until you are level with the horizon. You may want to shut off your engine and coast a bit if you have some time before you reach apoapsis but do not wait until the last moment to light up again. Start raising periapsis early. Check in map view to see both "ends" of your orbit are well clear of the air that will drag you right back down.

Once on orbit you can stage off everything except the Alpha itself. You can take the booster with you, too, for more on-orbit maneuvering; but all that mass will also make it harder to maneuver. Your choice. 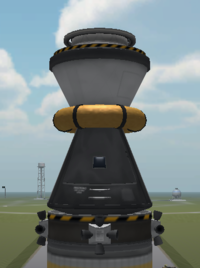 Now build a second rocket exactly like the first... except a bit different. Here I've attached a ROUND-8 Toroidal Fuel Tank, just to make it stand out. This will be our target vehicle. Launch it the same way except to a higher orbit -- burn longer. It doesn't matter exactly where you put it. You might take the upper stage with you this time; you can always get rid of it later.

Now switch back to Alpha-1 and set Alpha-2 as target. We're ready to rendezvous. This will take place in several phases... with no real clear lines between them.

NOTE: We'll work our way to hard dock with target without too much planning; and it won't be the most efficient possible use of fuel or our time, either. We'll use a fault tolerant strategy; so if you mess up, just keep going.