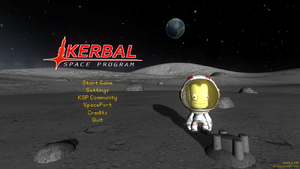 One of the two main menu images is that of a Kerbal standing on the Mun's surface, with Kerbin in the background. There is a 1 in 40 chance that a sand castle made of Mun dust can be seen at his feet.