The results of science activities often differ when performed in different biomes, and thus provide more opportunities to earn Science Points in Career Mode to research further along the technology tree. In Sandbox, even the text descriptions from experiments are unavailable, rendering biomes unimportant except for determining ore yield. For details and tips on how to get as much Science as possible from exploring biomes (and where to find water in a Mountain biome, for example), see the Science Tutorial.

Eve has 14 accesible biomes with their own science to be collected, as well as one inaccesible biome. Its main features are a large Explodium Sea with some scattered Islands and Shallow areas as well as a Main Continent and Poles. Within the Continent lie three large bodies of liquid, one being a Crater Lake. There are also areas covered with Impact Ejecta.

The planet Kerbin has 11 biomes, plus a large number of surface-only “location biomes” comprising Kerbal Space Center and related launch sites. Roughly 60% Kerbin's surface is Water biome. Grasslands and Highlands biomes cover most of the land area. Along with Moho and Ike it has distinct polar biomes. Due to a bug, the land within 470m from the north pole is part of the "Southern Ice Shelf" biome. 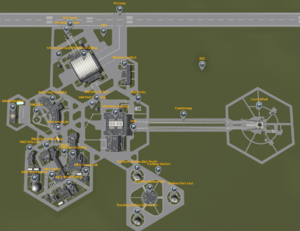 The moon of Duna, called Ike, has 8 biomes. It is one of three bodies (the other being Moho and Kerbin) that has their own North and South Pole biome. There are four uniquely named highland regions.

The planet Dres has 8 biomes. There are four biomes based on altitude instead of the usual 3.

The first moon of Jool, called Laythe, has 10 biomes. Laythe consists primarily of a huge ocean, called The Sagen Sea, with another ocean called the Degrasse Sea, two smaller named seas, some small Peaks, Dunes, and Shores biomes. It also has a Poles biome.

The second moon of Jool, called Vall, has 9 biomes. It has mostly large Lowlands broken up by ridges. There are four biomes based on altitude. There are four distinct Basins (lowlands).

The third moon of Jool, called Tylo, has 9 biomes. There are four general biomes based on alititude. There are four named Craters, three of were originally named Major Crater.

The fourth moon of Jool, called Bop, has 5 biomes, four based on altitude. The Ridges biome is located inside of the Slopes biome.

The fifth moon of Jool, called Pol, has 4 biomes. Highlands are erroneously placed near the lowlands as well.

The planet Eeloo has a total of 11 biomes. Three are based on altitude while several are based on geological features.