The Research and Development Facility(AKA R&D) was added in version 0.22 and is only accessible in Career mode and Science mode. In Sandbox mode the facility is closed.

The R&D facility serves two functions: unlocking parts in nodes of the Technology tree, and reviewing the results of science activities. It also has some cool bridges to pilot under. 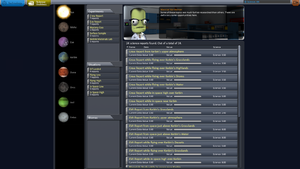 The Technology tab displays the tech tree. On it are the unlocked nodes and all nodes directly following them. Unlocking nodes requires Science points, though parts in locked nodes whose prerequisite nodes have been unlocked can be individually unlocked with funds on certain Game Difficulty settings.

The Science Archives allows browsing results of previously executed science activities. There are several filters available to limit it only to a specific body, situation, biome or experiment. Seeing which areas the experimental data is lacking from helps guide where best to send science-focused missions.

Since version 0.24, Research & Development Department has been an agency offering contracts, one of only two[outdated] which is not a manufacturer. Their contracts are focused entirely on gathering Science data and doing things that have never been done before. Crew survival isn't unwelcome either.

The Research and Development Facility is the largest structure in the Kerbal Space Center and consists of several buildings, though none are nearly as large as the Vehicle Assembly Building or the Spaceplane Hangar. Its complex architecture notably includes a two-storey tall tunnel through a large building and an elevated hallway connecting two buildings about five-storeys up. In the southwest corner is an observatory, presumably for an optical telescope. A separate building on the south side has massive ductwork for a wind tunnel. Nearby is a tank tower similar to that by the launch pad. Scattered around are numerous smaller buildings and quonset huts.

The result for taking a surface sample at KSC says it is the substance that “makes the scientists yell at us when we go into the labs without cleaning our boots first”. This theme may be a reference to real-life cases of extraterrestrial scientific samples being contaminated by terrestrial materials, such as the Earth bacteria discovered on drill bits used by Curiosity while on Mars.

If a player tries to enter the R&D facility in sandbox mode, a message will appear saying "The research and development facility is closed". Attempting to send experimental data (ex. from a Mystery Goo™ Containment Unit) will yield one of three messages such as "You feel that you aren't really learning anything."

In the first official release in 0.23.5, the scientific progress was reset when visiting the facility using a save from an old version.[1] An update afterwards changing the version number to 0.23.5.464 fixed that issue.[2]