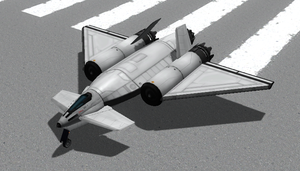 The Ravenspear Mk1 ready to start

The Ravenspear Mk1 is a stock plane capable of supersonic (rumours of hypersonic, too (according to Jeb)) flight. It has two TurboJet Engines and one Basic Jet Engine mounted between the Turbojet engines. It only has 2 Circular Intakes. The ladder of the craft is not usable, as the right canard is placed directly below it.

There are no action groups set up, but it is useful to have one to switch between the two engine types. This way it is possible to start with the subsonic Basic Jet Engine and later switch to the TurboJet Engines. All engines feed from their own tanks and there is no cross feeding.

Despite its looks, the Ravenspear Mk1 is not capable of spaceflight. However, the Aeris 4A is.

As of 0.25, the Ravenspear Mk1 has been modified to use the Spaceplane Plus parts added into KSP at that time.

The supplied plane works fine, but there are a few tweaks to make it even better: