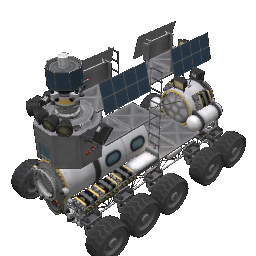 The crater clrawler's thumbnail in the stock craft menu as of 1.12.1. 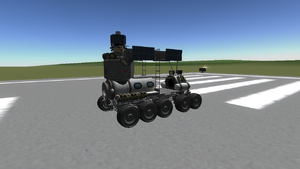 Crater Crawler on the runway (1.1)

Crater Crawler is a large rover which can be controlled by intermediate players on Kerbin but excellent at maneuvering on low-G bodies like Mun and Minmus, but it also works on planets like Eeloo and most moons in the game. It has a unique design in that it has many levels as if it was a manoeuvrable lab with many experiments and data on-board. It also has a mini-probe that sits above the cockpit, which means it can be either manned or unmanned; perfect for players who don't now if they want a manned or unmanned rover. 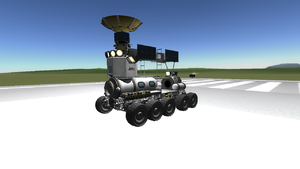 The craft is a heavy, 10-wheeled rover which is purposed for bodies with lower gravity. It has RCS for extra manoeuvrability when leaping from surface to air, It has docking ports to possibly dock with other Crater Crawlers, rovers, or potentially dock to a base on another world. It also has a little probe attached to the top of the rover which can be used to send to places rovers cannot go (i.e sinkholes) or possibly to get contact to other bases on the other side of the planet. 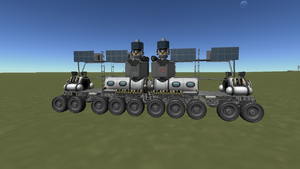 When docking with another Crater crawler, you'll have to align with their port and go at a reasonable 5m/s to dock as the RCS will block the ports from meeting at slower speeds. When 2 of them are docked, they are difficult to manoeuvre as they will slide across the surface as the docking ports are very stiff. Adding more to the ends will make it more difficult and will need more precision with turning.

It isn't possible to dock the back ends as the RCS ports prevent them from docking.