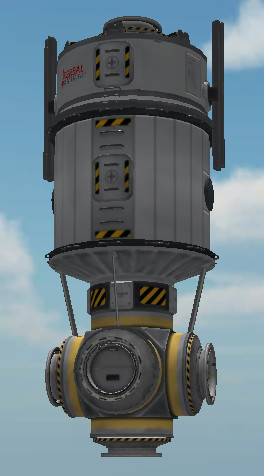 The Space Station Core is a stock craft meant to be the core part of a space station. As it has no any kind of propulsion, it needs a launch vehicle to reach the stable orbit. It features a Mk2 Lander-can and a PPD-10 Hitchhiker Storage Container. It also has numerous docking ports for connecting it to other parts of a space station.

It is externally similar to the DOS-7 Module of the former Mir Space Station.

• A similar vessel is shown in the official animated short A Cake Odyssey. The version in the film does not have a reaction wheel between the [Storage Container] and the [Multi-Point Connector]. Additionally, the solar panels are mounted on the connector instead of the [Lander Can].