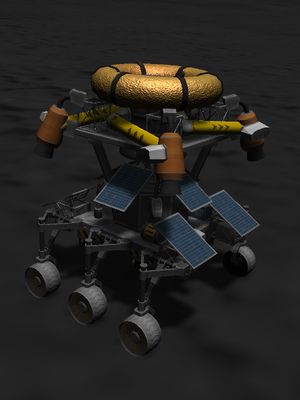 The complete craft landed on Mun. 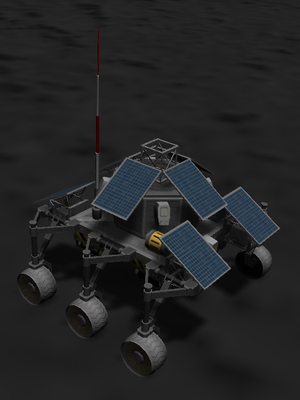 The rover with the extended antenna.

The Rover + Skycrane is a stock craft consisting of an unmanned rover with a landing module on top of it.

The landing module is propelled by 4 radially-mounted Rockomax 24-77 engines. Those are fuelled by one ROUND-8 Toroidal Fuel Tank and one Oscar-B Fuel Tank mounted on top of each other. This provides the rover with 460 m/s of delta-V (7.8 seconds at full throttle), enough to land from orbit on any solid body except for Tylo, Vall, Moho, Eeloo, and the Mun (though use of aerobraking is required on bodies with atmospheres). The skycrane could even bring the rover back into orbit again if it is landing on Gilly, Pol, Minmus, or Bop. Mun and Eeloo landings can be achieved by adding one more ROUND-8 fuel tank to the stack, and Vall and Moho landings can be achieved by adding two, but twelve additional ROUND-8 tanks are required to achieve a Tylo landing, which causes the center of mass to be dangerously high, resulting in a risk of tipping over at touchdown.

The landing module has no separate command module aboard, making it slightly complicated to detach the rover and then discard the landing module. The required technique is to set a small amount of throttle (either insufficient to lift both rover and skycrane, or small enough that the rover does not rise high enough to be damaged by the drop), then immediately trigger the decoupler. Engines remain at the throttle set when decoupled from their command module, so it will fly away uncontrolled (assuming there's sufficient fuel remaining), and hopefully crash somewhere innocuous. The chances of it landing back on the rover are near zero, due to surface rotation and it being quite unlikely to actually fly on a completely stable vertical vector. Alternatively it can be just decoupled and shaken off, but the semi-violent driving required risks overturning the rover.

Although it is named Skycrane it doesn't use the same technique to place the rover like the sky crane did with Curiosity. It is not possible in the stock game to have two parts only connected with a tether so that the landing module has to touch down with the rover.

The rover itself can be controlled by six RoveMax Model S2 wheels. It is equipped with various environmental sensors. There are eight OX-STAT Photovoltaic Panels placed on the top side tilted into all directions allowing sufficient electrical supply.

Note: By default, the wheels are mounted by radial instead of mirror symmetry, and its probecore points up instead of drive direction. Re-mounting the wheels to use mirror symmtery and reorient the probecore (or an additional front-pointing probecore) is highly recommended to ensure its functionality.