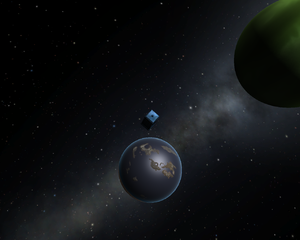 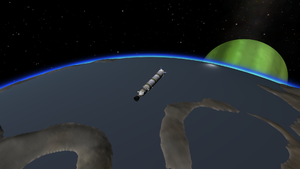 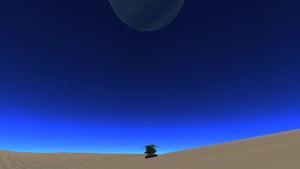 A probe on the surface of Laythe.

Laythe is one of the four natural satellites of Jool and its surface is mostly covered with seas.

Although mostly covered in liquid water, Laythe has scattered landmasses of rocky or sandy islands

This moon has an atmosphere, comparable in density to Kerbin's, which is roughly 50km thick.

With proper utilization of aerobraking near Jool and Laythe, it potentially requires the least delta-V of any of Jool's moons to reach. A periapsis of 119.5 km on a Jool approach will put your apoapsis roughly near Laythe's orbit.