The RK-7 "Kodiak" is a liquid fueled engine similar in performance to the LV-T30 "Reliant" Liquid Fuel Engine, but with a "Russian" theme. It allows for greater visual and thematic variety in Making History scenarios, and usually is used in conjunction with the RV-1 vernier.

Prior to 1.6, the RK-7's thrust, mass, Isp, and lack of vectoring make it almost identical (if more expensive) than the LV-T30, meaning it can in principle be used in the same situations. The high cost and position on the tech tree, however, make it an inferior choice in most situations.

After changes in 1.6, RK-7 have an increase in thrust, giving it a better ASL TWR and ISP, while the cost is lowered to make it identical to LV-T30. While it still high on the tech tree, due to its lower cost compare to vector and possibly better TWR than Skiff (craft dependent), once aesthetic is ignored it becomes a good engine for use in career mode.

As of version 1.4.1 this engine has three models that can be switched in the editor. 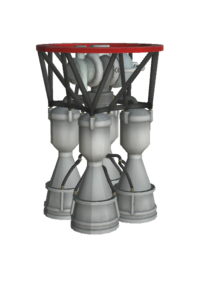 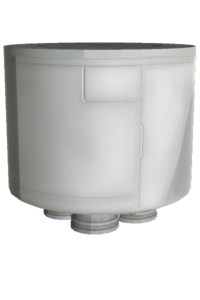 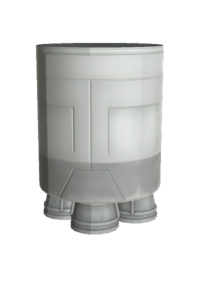 While bears are often used as a symbol of Russia, [kodiaks] live exclusively in the United States.

The RK-7 was inspired by the Russian RD-107 engine.