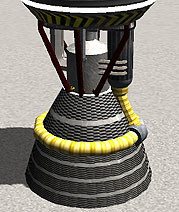 Staying relevant to KSP, we separate out air-breathing jet engines which can only operate inside an oxygen-rich atmosphere. All[outdated] use the same resources and are controlled the same way.

Liquid fuel engines utilize a mixture of liquid fuel and liquid oxidizer in a 9:11 ratio — generally called “rocket fuel”. The lone[outdated] exception is the O-10 MonoPropellant Engine which uses monopropellant.In the real world, typical liquid fuels are liquid hydrogen or kerosene, and typical oxidizers are liquid oxygen or nitrous-oxide.

The LV-N Atomic Rocket Motor was inspired by real-world nuclear thermal rockets, such as the NERVA. In these, the propellant (typically liquid hydrogen) is heated by a nuclear reactor, rather than being combusted with an oxidizer, expanding into a high velocity jet of gaseous hydrogen. However, in order to reduce development effort and to simplify gameplay, Squad chose to have the LV-N to use the same rocket fuel mixture as other engines.