Version 1.12.4 is a bugfix update that was released on November 2nd, 2022. This bugfix focused on broken references in the tutorial, such as the Swivel not being available after the model re-vamp in v1.12.

Starting the game through Steam now opens the Private Division launcher. "Will serve as a resource for news and updates about KSP & KSP 2 Early Access. In addition, you will be able to give feedback through the launcher once KSP 2 has been released into Early Access." 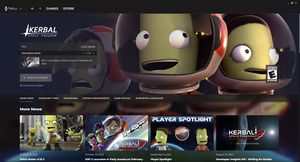