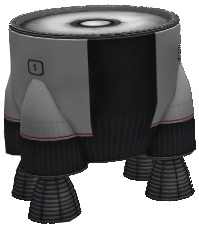 Unlike previous versions of the game, this version is officially called Asteroid Redirect Mission. It was originally announced as a mod pack or expansion pack, but in the end it contained so many ground breaking changes that it is considered a usual version update.[1][4][5][6] The redirect mission consists of approaching an asteroid and either capturing in Kerbin's orbit or simply preventing the asteroid from hitting Kerbin by altering its orbit.