The FL-T400 Fuel Tank provides fuel to liquid fuel engines, like the LV-T30, attached beneath it.

Since 0.13 it can be attached to radial decouplers and the sides of other fuel tanks.

Unlike the RT-10 Solid Fuel Booster, the amount of thrust can be dictated by the user, with varying severity in and out of the atmosphere of Kerbin. One can use full thrust, with a higher chance of overheat during atmospheric burning, and optimal thrust during low orbit, and minimal thrust for course corrections during high orbit.

Used correctly, an inordinate amount of fuel tanks are not necessary for orbit, as you cannot generate enough thrust in atmosphere with the liquid engine to make up for their weight. 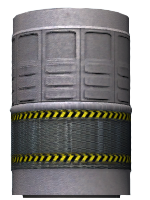