The Advanced Grabbing Unit Junior (AGU Jr.), is a small-sized docking device which can couple to any surface without the requirement of another docking device on the target to mate with. This is a virtual necessity for redirecting asteroids or comets, though the AGU can be used to grab onto much more than just asteroids. In fact, it can grab just about anything, even Kerbals. 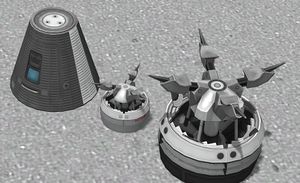 A size comparison of the two claw parts as of version 1.10

The AGU is the primary means of capturing and redirecting asteroids. It's also useful for craft-to-craft docking or for exchanging resources with craft or debris without a docking port. As with docking ports, resources (liquid fuel, electricity, etc.) can be exchanged with the target. And objects connected by claws are controlled together as a single entity. It's like a docking port, but without the complexity of aligning with a receiving port on the target. Kerbals grabbed by the AGU's claw will go limp in a ragdoll state and can be carried with the craft. It is a smaller (and lighter) version of the Advanced Grabbing Unit, with a 0.625m attachment node below. This also means that it is easier for it (the Jr, rather than the regular grabbing unit) to grab onto smaller objects, such as floating 1.25m parts frequently appeared in rescue missions.