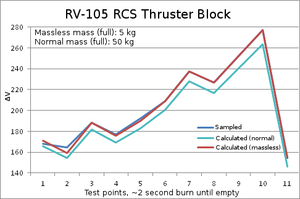 Delta-V comparison of three RV-105 RCS Thruster Block as massless and normal parts, before the changes introduced in 1.0.1

Physicsless parts are parts where the physics don't work in the usual way. The mass of the part and the drag experienced by it are added to the parent's part. The part itself has no mass nor drag at its point of placement, but it still contributes to the vehicle's total mass and drag; in short, during movement, the added physicless parts would not generate mass-shift and drag that affects lateral stability. Before 1.0.1 the mass and the drag weren't added to the parent but just ignored. It is influenced by the PhysicsSignificance flag in the part configuration which must be set to 1 to make it physicsless.

When constructing a craft, the root part can't be such a part.

A craft with only physicsless parts starts to oscillate after a short time and then starts to destroy itself. But this is usually not possible because the root part is always not a physicsless part. The game can change the property on the fly, so that when a new root part after decoupling would be physicsless the game removes that special status.

Note that several parts, such as the LT-2 Landing Strut, have PhysicsSignificance = 0 in its part.cfg. This does nothing, and the part behaves as normal.