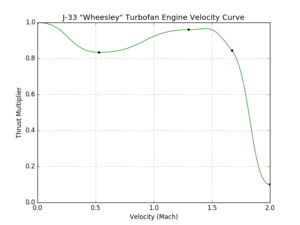 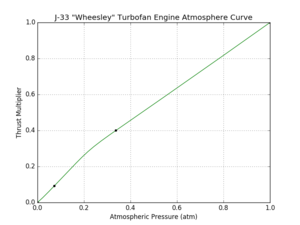 Unlike many of the other jet engines (and all of the rockets), this engine is capable of reversing its thrust. This makes it very useful for backing aircraft into hangars and for rapid deceleration during landing. The only other engine capable of this feature is the enormous J-90 "Goliath".

As with all jet engines, its thrust decreases significantly with altitude. Its maximum stationary thrust is rated at 120 kN at sea level. At about 8,000 m it generates just 48 kN, and at about 15,000 m it generates no more than 13.7 kN, ceasing to work entirely at about 22,900 m, which is remarkeably more than in prior versions (~15,600 m). Note that the behavior between these points (as shown in the part stats) is slightly non-linear.

Thrust output also varies with speed, although far less than on the more advanced engines. Similar to the other two low-speed engines, its thrust does not increase with speed, in contrast to the high-speed engines. Up to Mach 0.5 the thrust drops to about 80%, recovering to 95% at about Mach 1.5. Going faster, the thrust drops considerably quick, limiting usage to about Mach 2.1.

The Isp stays constant over the full range of application, which is a big change compared to KSP in pre-1.0 versions. It is rated at 10,500 s, making it the second most fuel-efficient engine, only the far more advanced 'Goliath' beating it. Being capable of sustained Mach 2 flight even with low tech plane parts, it is a good first choice for medium range flight, while real long range missions may be more convenient with a high speed engine, trading in some fuel efficiency for reduced flight time.

Overall, it works best between 8,000 and 15,000 m altitude. Flying lower, the high air resistance requires more thrust which lowers the fuel efficiency, while in higher areas the engine's thrust output is simply too low for reasonable performance in flight. A related word of warning: attempting to exceed Mach 1.8 at altitudes below 3,000 m will cause the engine to run exceedingly hot, dumping heat into the rest of the plane faster than it can be dissipated by convective cooling. Even at higher altitudes and with only one engine, heat-sensitive parts like early non-retractable landing gear attached near the engine can be flat-out destroyed from overheating during full-throttle intercontinental flights.

The designation “J-33 Wheesley” may be a reference to the real-life JT3D turbofan jet engine, also known as the TF33, made by U.S. aerospace company Pratt & Whitney which was involved with the Space Race.