The J-90 "Goliath" Turbofan Engine is a large air-breathing engine which uses liquid fuel and intake air, added with version 1.0.5 of Kerbal Space Program. This engine is the fourth air-breathing engine which can be unlocked in the tech tree, after the J-404 "Panther" Afterburning Turbofan, although in another branch of the tree. It is the only jet engine with large radial size, and built in air intake. This airliner engine pretty much can be considered the advanced big brother of the J-33 "Wheesley" Turbofan Engine, having practically identical performance curves, thrust reverse and even higher fuel efficiency. 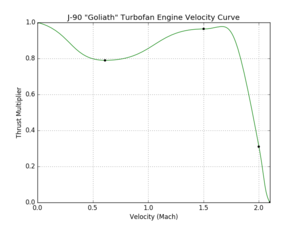 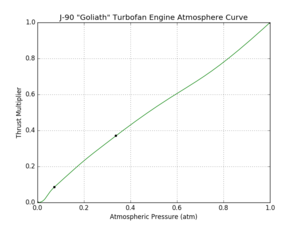 Unlike many of the other jet engines (and all of the rockets), this engine is capable of reversing its thrust, which makes it useful for rapid deceleration during landing and for backing into hangars. Since aircraft are usually built with more than one of this engine, it can also be handy for making sharp turns on the ground, since one engine can be put into reverse while the other continues pushing forwards. However, reversing on one side should be avoided in flight, as severe changes in lift on certain areas of the airframe will occur, possibly leaving the flight unrecoverable. Therfore thrust reverse should be assigned to an action group on multi-engine designs to ensure symmetric thrust / braking force. The only other engine capable of this feat is its little brother, the 'Wheesley'.

As with all jet engines, its thrust decreases significantly with altitude. Its maximum stationary thrust is rated at 360 kN at sea level. At about 8,000 m it generates just 132 kN, and at about 15,000 m it generates no more than 37 kN, ceasing to work entirely at about 20,900 m, which is somewhat below the 'Wheesley'. Note that the behavior between these points (as shown in the part stats) is slightly non-linear.

The Isp stays constant over the full range of application, which is a big change compared to KSP in pre-1.0 versions. It is rated at 12,600 s, making it the most fuel-efficient engine. As the engine is much bigger compared to the 'Wheesley' and as such generates considerably more drag at higher speeds, the surplus in Isp] likely is lost beyond mach ~1.3, dependent on plane design.

Overall, it works best between 8,000 and 15,000 m altitude on a larger (Mk3) cargo plane. Flying lower, the high air resistance requires more thrust which lowers the fuel efficiency, while in higher areas the engine's thrust output is simply too low for reasonable performance in flight. Placing it on a small plane, the size and weight of the engine likely eats up the nominal advantage over the 'Wheesley'