The Engine Pre-cooler is a combination of an air intake and a small liquid fuel tank. It is the most efficient inline supersonic intake offering markedly better performance than the Mk1 Diverterless Supersonic Intake at mach speeds higher than ~3.

The precooler is in principle a slightly better heat conductor than other (non-radiator) parts with double the heatConductivity and it also has superior heat emission which allows it to act as a passive radiator and wick away heat more effectively, this effect is not limited to engines nor to atmospheric use. However in practice it is very difficult to observe any actual benefit from these thermal characteristics and as it is also more effective at absorbing heat from the environment it may actually make overheating worse when the heat source is external (i.e. from re-entry) rather than internal.

Prior to 0.24 it was purely cosmetic but could be easily mistaken for an air intake. This part was originally developed for the C7 Spaceplane pack, and has become a stock part since 0.15.0 and the introduction of the Spaceplane Hangar. 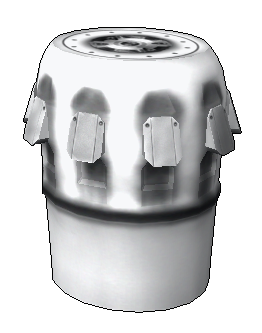