The SP-W 3x2 Photovoltaic Panels are a mid-sized set of deployable solar panels. Unlike the OX-4W/L, the SP-W/L features a heavy protective shroud. This shroud does not give any benefit to the panels itself, so it is just for aesthetics. 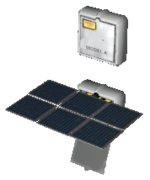 The SP-W deploys a 3×2 solar cell layout. There is also a SP-L 1x6 version available with a 1×6 layout. These panels generate electric charge only on extended state and directly illuminated by the light of Kerbol. To make these panels operational just choose the Extend Panels option in the pop-up menu by right-clicking on them. For retraction, choose the Retract Panels option with same method. The action groups can make this operation much easier - moreover using the Toggle Panels command, the player can extend and retract several solar panels with a single keystroke.

The electricity generation efficiency depends on the distance from Kerbol and the orientation of the panels. The panels set in the optimal orientation automatically, but this cannot always ensure the full generating power of 1.64 electric charge per second. If the panels are blocked by the craft itself, unable to face Kerbol, or blocked by a planet or natural sattelite (such as a moon,) the module will not generate power.

These panels are very vulnerable in their extended state, a minor shaking, bumping into them during EVA, or even air speed (such as forces during re-entry) can break them off. Because of this, you will need to be considerate of your movement on a celestial body, within an atmosphere, or your movement during an EVA. Ideally, retract the panels before moving again to avoid direct exposure to said forces. Additionally, when destroyed, the panels cannot be repaired.