The LY-10 Small Landing Gear (formerly known as the Small Gear Bay) is a retractable wheel that is primarily used on atmospheric planes, but may be used on other objects that need to roll.

The LY-10 Small Landing Gear allows planes to roll on the ground instead of sliding and (most likely) exploding. They can also be used to create rovers that roll on planet surfaces. They come equipped with electric lights.

Despite the game presenting them among the rover wheel parts in the editors, there are some important differences between them. Landing gear parts have no motor, so vehicles using these wheels must have another means of acceleration. Since planes usually have a jet or rocket engines, this usually does not pose much of an issue. Planes must use their engines to propel themselves on the ground, unlike rovers.

On the other hand, since they are designed to support planes during their takeoff or landing runs, they can withstand a vastly higher ground speed than rover wheels, needing over 200 m/s to break.

The LY-10 Small Landing Gear has the ability to steer, allowing sharper turns on the ground. This can be toggled either through tweakables or in flight.

As a retractable landing gear, the LY-10 Small Landing Gear is well suited to faster planes; the gear can be retracted, massively reducing the amount of drag it generates.

The practical load limit for a single LY-10 wheel is about 7 tonnes. 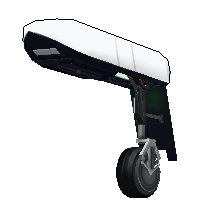