The TVR-1180C Mk1 Stack Tri-Coupler is an adapter that allows for a single rocket to branch into 3 separate stacks.

All nodes on the TVR-1180C are 1.25 meters (small). As with all adapters, liquid fuel will flow through it. Despite the similar name, the TVR-1180C is not a decoupler; it does not jettison anything nor does it add a stage to the rocket. It branches into 3 separate stacks, but they are unsupported and prone to bending or breaking if the weight and thrust are not properly distributed. Rockets incorporating a tri-coupler are also likely to wobble, unless the stacks are opportunely bound together with EAS-4 Strut Connectors. The tricoupler is also subtly asymmetrical, so rockets must have control options to correct for induced pitch, yaw, and/or roll. The tricoupler has non-standard (0.3 instead of 0.2) drag, meaning it should be placed behind the center of mass.

Another, unconventional use of this part is as a landing 'foot' - when landing very large craft (such as bases), the stock landing legs aren't big or powerful - using the strut parts as 'legs' and the tricoupler as a 'foot', you can artificially make your own landing leg!

As of version 1.6 this adapter has three textures that can be switched in the editor. 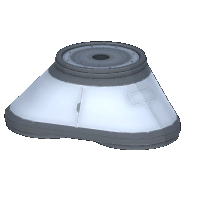 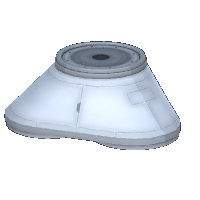 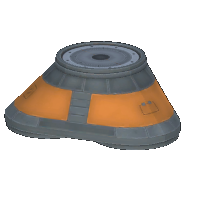