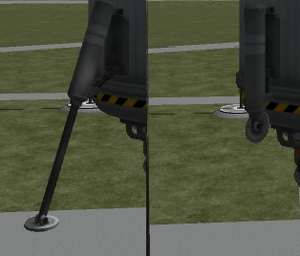 The LT-1 Landing Strut is used as landing support when landing vertically.

The LT-1 is connected radially and extends with the G key (default). It does not extend as far as the larger LT-2 Landing Strut, but is half as heavy.

As they are relatively short, LT-1 landing struts need to be placed low on a rocket. They do not extend far enough to be used with LV-T30, LV-T45, or the Poodle, but can reach past the LV-909 and Aerospike. A workaround with larger engines is using girders, I-beams or panels to extend lower on the craft with a landing strut on each to contact the ground.

The maximum safe landing speed for an LT-1 landing strut is ~12 m/s. Landings with massive rockets or on rough terrain may need to be slower to avoid ripping off landing legs.

Each LT-1 leg can barely support 15 tons in Kerbin's gravity when sitting still. Each leg can absorb a gentle landing impact for a 3-ton load.

There are two settings for the landing leg: spring and damper. It depends on the gravity of the landing site, but also on the mass of the ship.

In general, to prevent a ship bouncing around, set the damper higher than springs, maybe even crank up damper strength.